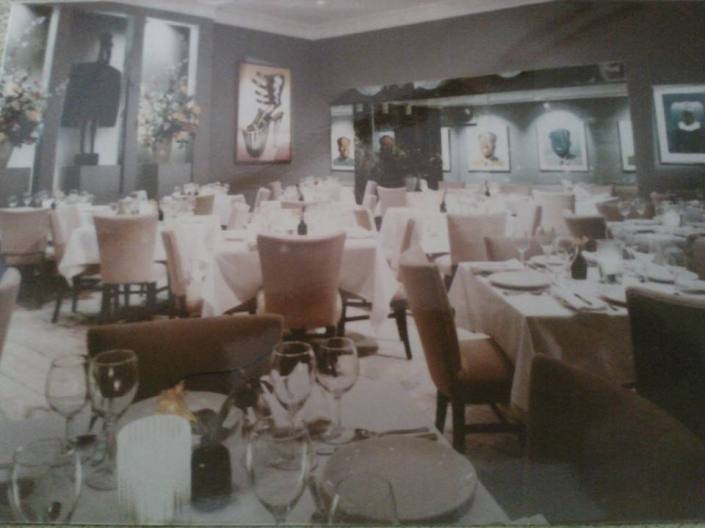 the year was 1977. i was 19 years old and had been a  gogo dancer at a gay bar in chicago and transitioned to bartender at that place. i worked with a guy who was dating a server from a french seafood restaurant in the belmont hotel called tango and got a second job as a coat check boy there. the manager “nadia” moved me to service bartender within a couple of months. there were over 200 wines on the winelist which often needed to be waded through with the help of the gritty and classic frend sommalier “gerard” the chef  “henri coudrier” had also emigrated from france and set up residence in the windy city. the bar area was slick and uber modern. you walked in and were greeted on the right by an elegantly dressed host and the left was the entrance to the bar which was flanked by a large smoked sturgeon on crushed ice and a wedge of gruyere. the martinis were served with blue cheese stuffed olives. the food was au-courant.

i worked at badonsky’s brewery and le bastille as well. all were amazing training grounds and ignited my romance with fine dining and intersting cuisine. but it was the life behind the scenes that truly captured my attention. the mechanics of putting on such a beautiful and memorable show each night was instantly fascinating. and the art of service has been a passion of mine these almost 40 years. the owner of tango (and several other popular eateries in chicago passed in mid-december of 2014. his daughter jessica even found a blog post of mine about the restaurant just after that time and left a sweet comment- she was about 5 or so when i worked there. this article came out in the chicago sun-times and a co-worker and friend from that time posted pics with that article on facebook.

it was like a big warm hug and brought back sweet memories and i realized that i have lived a lifetime dancing in the glow of that same food-service choreography i learned at george badonsky’s restaurants those decades ago. i love the backstage element. i love the entrances and exits from stage left and stage right. the applause is quiet, but somehow the satisfaction that producing a memorable dining experience has become like a japanese scroll painting for me extending and shifting and rolling out and in over these years. i continue to do this work to this day. and i still find joy and satisfaction. friendship, love, and fulfillment. the feeling of a job well done. and i still feel at home in the kitchen and at a dinner party.

here is the article reprinted from the chicago sun-times..

George Badonsky, 78; restaurateur ‘was ahead of his time’

George Badonsky was sued by Italian couturier Pierre Cardin, had a hand in two of the biggest garage rock hits of all time, and ran some of the hottest restaurants in Chicago in the 1970s and 1980s.

Mr. Badonsky, 78, died Dec. 14 at his Harbor Country home in Stevensville, Michigan. He had had bypass surgery at the end of August.

“He was found in his kitchen, where he would have wanted to be,” said a friend, Leigh Jones.

When Chicago was still a meat-and-potatoes town, Mr. Badonsky started restaurants that were a mirepoix of tasty food, entertainment and events. On Bastille Day, he closed down the street for wine-carrying waiter races at his bistro, Le Bastille, 21 W. Superior.

“He was ahead of his time,” said chef Jean Joho of Everest, whom Mr. Badonsky recruited from France to America to polish the jewel of his restaurant realm, Maxim’s on Astor Street. “He had five restaurants, and they were all hip and modern. . . . He loved food, and he was what you would call a bon vivant.”

“He was a pioneering, iconic restaurateur in Chicago who brought wonderful new restaurants to the North Side,” said Larry Levy, founder of Levy Restaurants. “I admired him a lot.”

His empire started in 1969, when Mr. Badonsky opened the Brewery, an upscale burger joint at Broadway and Briar. Then came Tango, an airy, romantic room in the Belmont Hotel decorated with Andy Warhol’s Mao and art by Peter Max. It featured fresh fish, “all flown in from the East Coast,” said Joho.

In the 1970s, he launched Le Bastille, an authentic French bistro. “If you were at Le Bastille,” said Joho, “you were in France.” Before anyone in Chicago made much ado about the arrival of Beaujolais Nouveau, “He created a festival” tied to the wine, said John Banks, who with Garret Eakin of Banks/Eakin architects helped build  his restaurants. “That was just a great event and party.”

Later in the decade, he opened George’s, a 220-seat cabaret at 230 W. Kinzie that was one of the first places in the city to showcase Northern Italian food. It presented hot comedians and stars including songstress Etta James; Ruth Brown, the R&B dynamo who appeared in the 1988 film “Hairspray;” nightclub legend Bricktop, who ran with Hemingway and Fitzgerald in Paris; jazz greats Sarah Vaughan, Dorothy Donegan and Blossom Dearie; blues chanteuse Alberta Hunter; drummer Buddy Rich, Harry Connick, Jr. and singer Bill Withers, known for “Lean on Me,” “Use Me,” “Ain’t No Sunshine,” “A Lovely Day” and “Just the Two of Us.”

Mr. Badonsky bought and reopened the elegant Maxim’s on Astor in 1984. It featured rich fare like Burgundian snails in ravioli and quail eggs with fresh foie gras. Cardin, who owned the Maxim’s de Paris name, wound up suing him over licensing rights. Mr. Badonsky prevailed by adding his own name to the restaurant to differentiate it, said his ex-wie, actress Pat Bowie.

He got out of the business for a variety of reasons. Extended restaurant martini lunches were becoming a thing of the past. Some thought Maxim’s opened at a time when diners wanted simpler options. George’s required attention to the entertainers, in addition to the menu. A devastating fire occurred at George’s in 1984.

And as Mr. Badonsky’s father took ill, he devoted himself to his care. “Instead of putting him in a rest home, he took a lot of personal time in Michigan with his dad, and had his dad move in with him,” Banks said. “He took care of his dad 24-7. He did it by himself, really. That just really impressed me. That’s the kind of person he was.”

“He wasn’t the kind of dad that read stories at night,” said his daughter, Jessica Jolie Badonsky. “But he introduced me to food, and [performers] Nancy Wilson, Sarah Vaughan, Dorothy Donegan and Jessye Norman.” Her father bestowed her middle name, French for “pretty.” He doted on his two grandchildren and enjoyed babysitting, she said.

Mr. Badonsky had a whole other life before becoming a restaurateur. He worked at record companies and co-produced two 1960s smashes that came out of Chicago, “Gloria” by the Shadows of Knight and “The White Ship” by H.P. Lovecraft. He also had a hand in the hit “Bend Me, Shape Me” by American Breed,  Bowie said.

His curiosity contributed to his success, she said. “He would talk to someone on the phone and the next thing you know, he’d be on there an hour, learning about how to buy the best meats.”

Mr. Badonsky was born in New York. He told the Sun-Times in 1988 that his father, Andrew, was a custom tailor who had to add $22,000 in gold braid to Dominican dictator Rafael Trujillo’s clothing, an extravagance that taught him to equate simplicity with elegance.

He also is survived by a sister, Elizabeth Ecoff. A Chicago memorial is being planned.

thank you george… for the gift that has lasted a lifetime… you don’t know how glad i am.

Only We Can Change our Life, No one Else Do it For Us